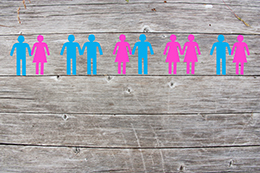 Despite progress in the United States, a large percentage of LGBTQIA+ individuals are subjected to various forms of discrimination each year. Gender and gender identity related issues infiltrate nearly every aspect of life, including employment. LGBTQIA+ individuals face enormous challenges in the workplace. Discrimination occurs on a regular basis in hiring, promoting, and retaining employees who are perceived as “non-conforming.”

While the United States Supreme Court recently ruled that the prohibition against sex discrimination in Title VII of the Civil Rights Act of 1964 has now been expanded to prohibit discrimination based on sexual orientation and gender identity, many workplaces remain resistant to hiring or promoting LGBTQIA+ employees. Further, workplaces can be rife with inappropriate banter, comments, or jokes when an LGBTQIA+ individual is interviewed or hired for a position. Many LGBTQIA+ individuals are under extraordinary pressure to perform out of fear of facing harsher performance evaluations, harsher critiques and swift terminations without cause. WPGCH not only understands the challenges LGBTQIA+ individuals face, but highly experienced LGBTQIA+ attorney, Steve Tisi, can relate to many of the challenges you may be facing.

For employers, navigating frequently changing discrimination laws can pose a challenge. At times, employers may have existing staff who are resistant to accepting new employees who are perceived as “non-conforming” and who expose the employer to liability by engaging in inappropriate conduct. Other times, the employer is wrongfully accused of discriminating against an employee or applicant on the basis of gender, gender identity, or sexual orientation. There are situations where employers have the right to enforce rules and regulations in the workplace which serve legitimate, non-discriminatory purposes. WPGCH has the unique experience necessary to defend your business or organization from threatened or existing discrimination litigation. Contact us today.